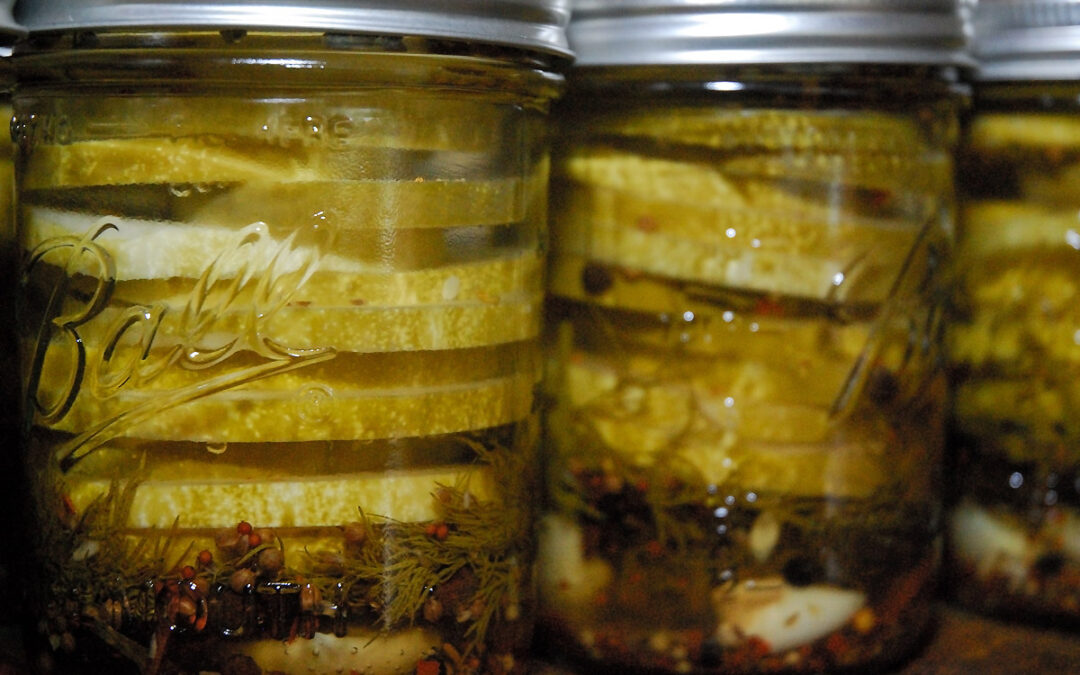 The cucumbers are quite literally spilling out of the garden. Personally, I’m thrilled, as it wasn’t that long ago that we had a fence failure, and the deer delighted in devouring the plants. They bounced back though, with a vengeance! For pickling cucumbers, this year I decided to keep it simple. Plant plenty of a single variety of heirloom cucumbers, in the hopes that the crop comes in all together to help make pickling a little more efficient. That’s exactly what I did by planting the heirloom ‘Homemade Pickles’. A fabulous name, for a great, and productive variety. What I wasn’t counting on was the level of production, and the constant steady stream of cucumbers finding their way into the farm’s kitchen. A definite case of be careful what you ask for!

They’re sweet, a perfect pickling size, prolific, and there is no question we’ll plant these again next year.

In the meantime, to preserve some of this crop of cucumbers, we’ve been busy making pickles. A little dill, some pickling spices, and garlic. Just add cucumbers, and brine!

Place all of the ingredients for the pickling spice blend in a small bowl, and mix thoroughly. The spice blend yields approximately 3/4 of a dry pint, and can be stored in an airtight container for up to 6 months. Have 6 hot, sterilized pint jars (wide-mouth preferred) and their lids ready (see video below for tips on preparing your jars for canning).

Wash the cucumbers, trim the ends, and slice each cucumber into 1/4-1/2 inch slices. If you don’t have a mandoline, try to keep the width of the slices consistent

Using a mandoline for slicing the cucumbers will help to keep the slices the same thickness, and the texture of the pickles will be more consistent.

Combine vinegar, water, and salt in a large non-reactive saucepan. Bring to a boil over medium-high heat, and stir until the salt is dissolved.

In each sterilized jar add 1 tablespoon of the pickling spice blend, and 4 cloves of garlic. Then add four sprigs of fresh dill to each jar. 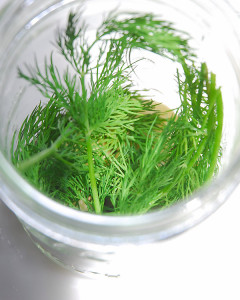 The most important ingredient, dill!

Layer the cucumber slices in each jar, packing them tightly to avoid large gaps, leaving 3/4 of an inch of space below the jar rim.

If using, sprinkle 1/8th tsp of calcium chloride granules over the top of the cucumbers in each jar, then ladle the hot brine into the jars leaving 1/2 inch of headspace. Remove any air bubbles, adjust the headspace as needed, and wipe the rims clean. Seal tightly with the lids.

Process the jars for 7 minutes in a boiling water bath. Process the jars in a hot water bath

Leave the jars to stand undisturbed for 24 hours and then set them aside for at least 3 weeks before opening to allow the flavors to develop. Store sealed jars in a dark place for up to 12 months. If a seal has failed, store the jar in the refrigerator for up to 1 week.

Don’t have your own cucumbers? Try your local Farmer’s Market!

——————
The following helpful video demonstrates the boiling-water bath canning technique, including basic required equipment, and how to prepare your jars and lids for canning: