I realize that I’ve posted about writing spiders before, so for more information about their feeding habits, and web construction, you can see the previous post here.

However, this morning I encountered not one, but TWO species of Argiope spiders, suspended in their respective webs, less than a foot apart from each other. I was a little surprised to see them though, as I don’t usually expect to see many of these spiders until mid-late October.

I first noticed this very large female Banded Garden Spider (Argiope trifasciata) a few days ago, tucked into a prostrate rosemary shrub at the top of the orchard bank.

As we often see here in the fall, she was dining on a cocooned honey bee that she’d likely caught earlier in the day.

While I was taking a couple of photographs this morning though, I noted what I thought were galls out of the corner of my eye. We find various shaped galls on our oaks, and wild roses, all the time, but I’ve never seen any sort of gall on a rosemary plant. As I pulled the camera away from my eye though, I realized this wasn’t a gall at all, it was an Argiope egg sac!

In my last post about these spiders I mentioned that I’d keep my eye out for egg sacs, but never did actually find any, even though we see these spiders in our gardens every fall.

That said, often when I find these spiders they’ve been in somewhat exposed locations, either out among the decaying foliage in the winter squash garden, or suspended between tree branches in the orchard, with no secluded location to shelter an egg sac.

This time though, there wasn’t just one, but TWO of them neatly tucked down between the rosemary branches, and quite well camouflaged. They’re not small either, each measuring at least a 1.5 cm in diameter.

Females are known to produce between one and four egg sacs, each of which may contain close to a thousand eggs. Each protective sac is constructed of a tough brown paper-like silk.

Although I had a good dorsal view of this spider, I climbed back up the bank to look at little more closely at her meal that she was keeping securely underneath her.

My footing was a bit tricky, and I could smell the pungent aroma of crushed rosemary leaves as I maneuvered myself into a better position, and then I noticed a second web, with another spider, just inches from the first. This one though is a different species, the yellow and black garden spider (Argiope aurantia) that I wrote about previously.

This image gives you an idea of how close together these spiders were. There’s no question that prostrate rosemary makes for great spider habitat. It’s a good thing I’m not an arachnophobe, in fact, I welcome seeing so many spiders in the garden.

While I was trying to get a photograph of this yellow and black garden spider, she bounced, very abruptly, toward my lens, startling me enough that I almost slipped down the slope.

As I looked over the top of the view finder I saw why she had moved so suddenly.

Brunch had arrived, in the shape of a grasshopper.

She paused for a few seconds, with threads from her spinnerets poised. Then she quickly began to spin, flip, wrap, and gradually entomb her prey, to dine on this morsel later. 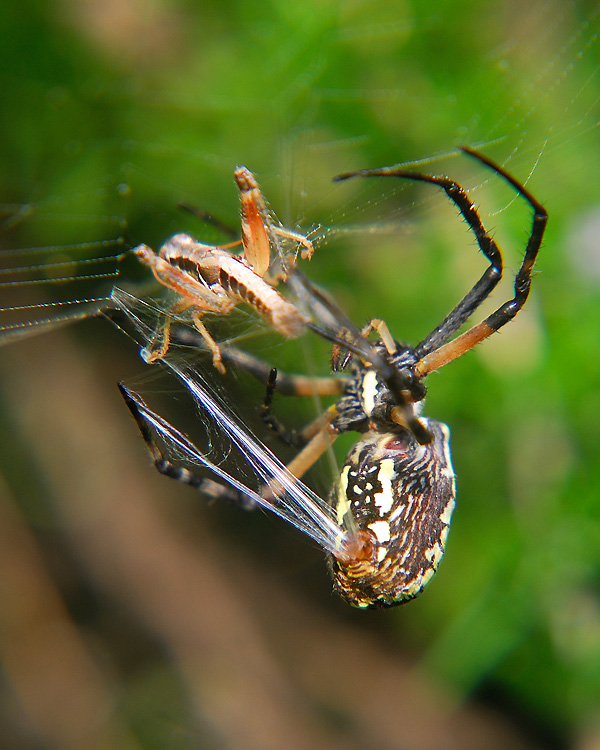 I’m always impressed with the amount of silk spiders can produce.  Writing spiders are renowned for reconstructing their intricate webs each day, but seeing how much silk they can produce all once, for a task such as this, really is quite impressive.

And then, just before she finished wrapping her meal, my camera battery died. Of course! When she was done though, her meal looked remarkably like this one I found in the orchard last year.

Both of these spiders seem quite content to be lurking in the rosemary, which is producing just enough blooms at the moment to entice the occasional meal toward one of their webs. I’ll be watching the eggs sacs very closely this winter though, and as they’re quite low to the ground we’ll be careful during fall cleanup so we don’t damage them. The young will hatch inside the sacs over winter, and if they can avoid being predated on, they should emerge once the warm weather returns next year. I’m really looking forward to having an opportunity to see some Argiope spiderlings emerge next spring! 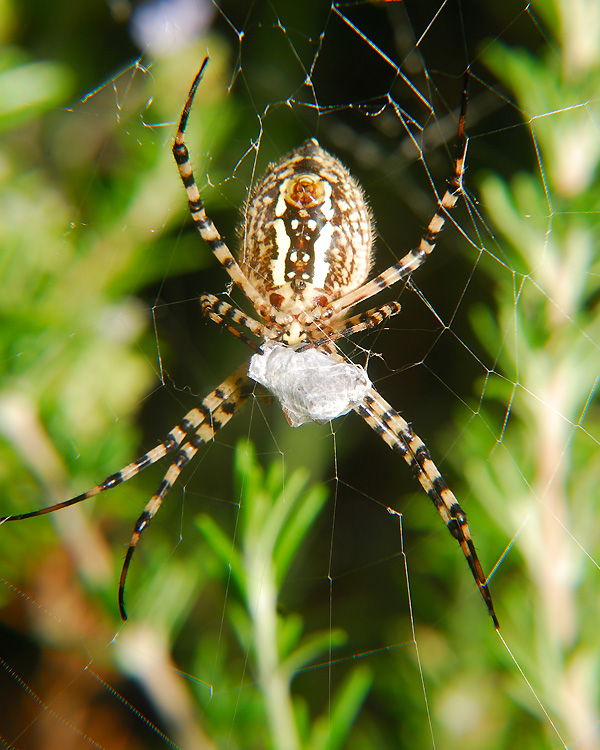