Nature’s Wrath: From Drought to Deluge Having just officially entered our fourth year of drought, a recent series of Pacific storms have had many Californians jumping for joy, myself included. In our last post the farm was in the midst of one such storm. Once the rain ceased, we were already preparing for the next storm. This next storm, however, was predicted to be MUCH stronger than the last. Earlier this week the National Weather Service was predicting that this area of the Santa Cruz Mountains could receive a daunting 7.5 inches of rain with the next storm, which was also predicted to bring steady 30-40 mile per hour winds, with gusts along the coast upwards of 60 mph. Our main creek bed as of November 21st…dry.

Although we’ve been relatively dry the last few seasons, large storms, outside of a drought, are very common during the winter months here. Too much rain, or wind, however, can certainly cause problems, from downed trees, and power lines, to mudslides, and road wash-outs. Mountain living certainly isn’t for everyone, but if you choose to live in the coastal mountains, it’s essential to be prepared…for almost anything!

Preparing for the worst, we spent the week leading up to our predicted monster storm making sure that anything capable of blowing away or floating away was either stored away, or secured. Extra hay was put up, batteries were charged, the tractor, generator and chainsaws were fueled, and vehicles were spread out, and moved away from potentially hazardous trees. Chainsaws aren’t optional when you live in the woods

Although we have a portable generator to keep the freezers going in an extended power outage, the farm has no hot water, or a functioning stove when the electricity is out. Before the storm arrived I spent a day in the kitchen preparing food that could be easily nibbled on, or simply reheated in the microwave (via the generator), or on the outdoor grill. We’ve previously lost power on the farm for four days at a time, so a bag of chips, or box of crackers, simply wasn’t going to cut it. As the freezers are now full of goat milk, I prepared a large pot of chili in advance of the storm

I made a large pot of chili, a quiche (which can be consumed cold if necessary), some extra pumpkin bread, and a couple of loaves of our trusty oatmeal-wheat bread to go with some goat cheese already in the fridge. By the time the storm was pushing ashore we were certain we were as ready as we could be. We certainly weren’t going to starve! Before the first wave of heavy rain, the winds started to gust, and while we were in the goat barn we heard the first tree fall across the creek. Our biggest concern with this storm wasn’t so much the rain, but the wind. If you’ve been to the farm you know that our slopes are covered with a lot of towering redwoods, and incredibly tall Douglas Fir trees. Unfortunately these trees tend to be rather shallow-rooted, and our soils are very soft, so saturated soil, paired with strong winds, can create a lot of excitement around here.

As we left the barn we heard the crack and crash of a second tree uphill of the house, but couldn’t see the fallen tree for the forest. With the gusting winds we decided it would be safer to look for it after the storm had passed.

The first band of rain was intense. Really intense! Since installing our weather station we’ve NEVER observed rain rates this high before. For a few brief minutes the rain was falling over the farm at an incredible 9.00 inches per hour! 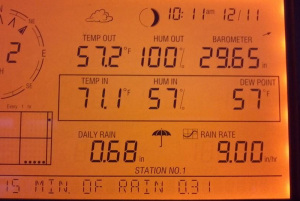 A rain rate of 9.00 inches per hour is the highest we’ve ever recorded here

The roar of the water hitting the roof was absolutely deafening. Fortunately, no sooner had I snapped this photograph of the weather station’s receiver, than the deluge began to subside.

As the rain intensity diminished, the winds also died down, and for most of the afternoon it seemed like any other typical rainy day on the farm. Then, suddenly, with no warning, a large Ceanothus thyrsiflorus decided to sag, and slip off the slope near the deck behind the house around 3:30 PM. Although this tree hit the deck behind the house, it did no damage

No crack, no crash, no drama, more of a gentle whoosh as it slipped off the hill, and gently rested on the patio table. The canopy branches were laid out across the table, with the main trunk held up by the deck railing. As tree falls go it was rather tame. Once the rain finally stops, we’ll have to clear it, but fortunately no harm was done, and we weren’t planning on dining outside this weekend anyway. The same tree in April 2010 in full bloom

By early evening the storm was dissipating, although there were still some fierce looking echos on area radar maps, most of the heavy rain seemed to skirt by us, for a change.

Around 6 PM it was time to head down to the barn to feed and milk the goats that are still in milk. However, we went to prepare the milking bucket in the kitchen, and immediately noticed that something was amiss. We had no water. Not a drop dribbled out of the kitchen faucet.

Our water comes from an agricultural well. Once the water reaches ground level it is then pumped another 350 feet straight up to an old redwood tank perched up on one of the highest, and most inaccessible points on the farm. Last time we had no water one of the capacitors in the well relay failed, and the tank simply failed to fill. This time the outflow supply line between the tank, and the house, was sheared, and 2500 gallons of water drained out onto the slope. To stem the tide we started by closing the shutoff valve from the tank to the house, and then headed back to the barn. We hauled some emergency water stored in 5 gallon bottles down to the goats. Once they were fed, watered, and settled in for the night, with spare parts and PVC cement in hand, it was time for a hike up a very steep slope, in the dark, during a deluge. I know farm living isn’t all glamour, but why do these things never happen during daylight hours? The broken pipe was replaced in the dark, in a deluge, but it works!

With the persistent rain we weren’t sure if our emergency pipe repair would work, but as it takes time for the glue to cure, the sooner we could get it done, the better. Fortunately, despite less than ideal climatic conditions during our pipe repair, water was successfully restored this morning.

The only other event of note last night was that a steep section of hillside that flanks part of the driveway slipped. These small landslips are common here, especially in areas where our soil is more sandy. A quick pass with the front-loader on the tractor though, and it’s now gone, although more may slip with the next storm to pass through. Overall, we’re happy to say that here at least the storm was something of a fizzle. Certainly not living up to all the hype on social media earlier this week. However, looking elsewhere around the Bay Area it’s obvious that we were incredibly fortunate this time. This area of the Santa Cruz Mountains frequently gets pummeled during a major Pacific Storm, but for some reason this one only gave us a glancing blow. A 40 foot oak was toppled near the water tank This conk-like fungus, the size of my head, shows this oak was in a state of decay before the storm felled it

There were some local newsworthy stories though, including a house in Seabright that was sliced in half by falling redwoods (no injuries thankfully), and an 11 year-old that was briefly trapped, and injured, after a tree fell in a local school playground.

Here on the farm though the storm’s impact was relatively minor as we only endured a total of 3.11 inches of rain, and a few brief gusts of wind. Although it was less than half of the rain forecast to fall here, it was enough to really help get both creeks flowing again, and for that we’re very grateful. Both creeks on the farm have been dry more months than they’ve had water in them for the last few years. The main creek this morning is a little turbid, but flowing!

Most of the intense rain and wind tracked north and east of us for most the day, and for once, this part of the Santa Cruz Mountains at least, was relatively unscathed. For perspective this certainly wasn’t as intense as the remnants of Typhoon Melor we endured in 2009, or even as bad as the damage from the intense wind storm in December 2011, both of which were much more intense than yesterday’s social media dubbed “#Hellastorm”. We really were incredibly fortunate yesterday. Losing our main water supply though was a wake up call, and after a few relatively dry and tame winters, this storm was a good drill for testing our current level of preparedness. Although we mostly passed, we did identify a need to seriously upgrade our emergency potable water supply. So, this weekend it looks like we’ll be writing a letter to Santa for a bigger livestock water storage tank for the farm. Maybe the dogs will help with the post-storm cleanup

Once the skies have finally cleared we’ll focus on cleaning up the fallen branches and leaf litter that are strewn everywhere from the wind, but in the meantime we’re just grateful to have survived this ‘Hellastorm’ relatively unscathed. Despite all this recent rain, we’re still in the midst of an exceptional drought!

Now we’ll see what the rest of winter brings, and hopefully we’ll make at least a small dent in this stubborn and persistent drought!