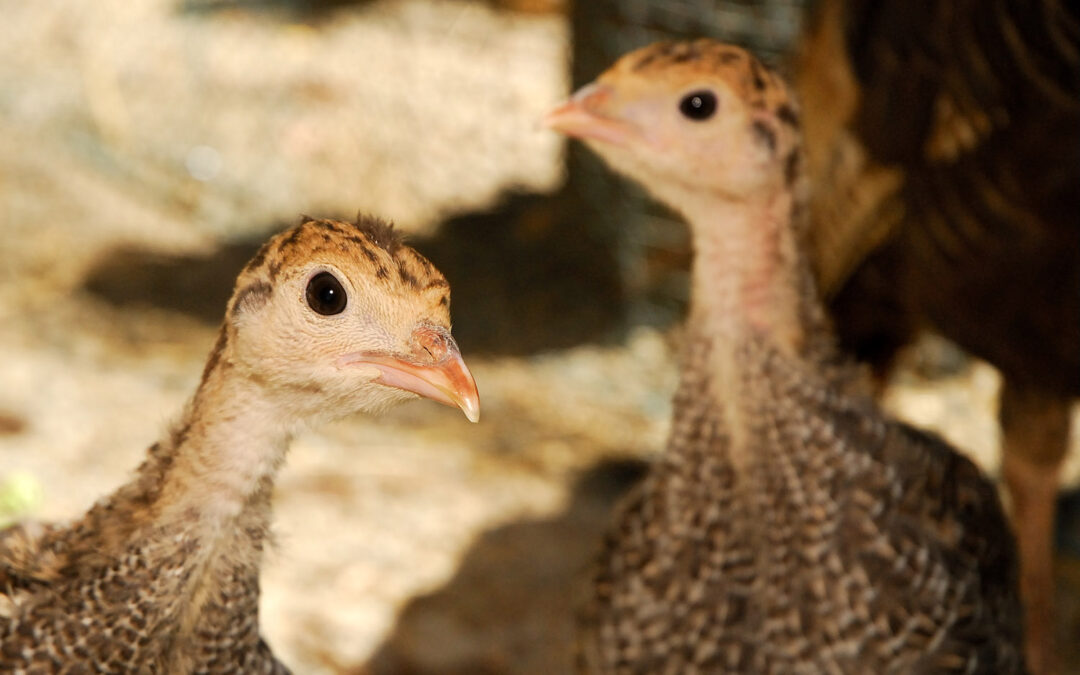 We haven’t posted an update about Jenny’s poults in the last couple of weeks, due in large part to a rather hefty construction project going on around here, which I’ll elaborate on early next week.  In the meantime though, while we weren’t looking, the poults have been growing like weeds! Just a few short weeks ago these poults were just tiny chicks!

It’s amazing how much they’ve grown in just 6 short weeks.  From tiny little balls of fluff… They were so tiny when they hatched!

…to miniature fully feathered turkeys, with only scant remains of fluffy down. Now in the evenings when I go up to the pen to check that everyone is secure for the night, I find Jenny crouched on the ground, surrounded by all the poults just standing next to her, as they simply don’t fit underneath anymore! Remember how tiny they were on 4th of July weekend?

Perhaps you remember this video?  There’s no way the poults could do that now! The poults have grown a lot, and now regularly enjoy a small salad as a treat

The poults are even acting more like young turkeys than chicks.  They’re not quite as playful as they’ve been in recent weeks, and this morning, while sitting in the pen, not a single poult jumped up onto my boots.  This bee however, who seemed to have taken a wrong turn at a nearby patch of dandelions outside Jake’s side of the pen, did alight on my boot for a few seconds, before finding its way back to the flowers. This is the first honey bee I've seen inside the turkey pen, clearly reminding me I'm overdue publishing an update on our bees!

There was a little excitement this morning when a Red-tailed Hawk flew overhead while I was in the pen.  When you’re prey, being hyper-vigilant and aware of your surroundings can be critical to survival.  Even at this young age the poults are well aware that predators come from above too. In the second half of this video you can hear Jenny’s chirp-like alarm call (along with our hysterical hens in the background, who weren’t amused either), and see that the poults were standing tall, on high alert…

As scary as the outside world can be though, after the incursion a couple of weeks ago, the poults have been very secure since we made some modifications to the pen walls, and I’m happy to say that there have been no further incidents.  The young bronze poult we mentioned in the last post that sustained an injury that night below his lower beak, responded very well to treatment, and is now completely healed.  So much so that I can’t tell which of the bronzes it was now! The poults however are running out of room, and so as of today we are listing Jenny’s poults for sale.  They’re now just about the same age as Jake and Jenny were when we first brought them to the farm last year.  Clearly old enough, at least with the warm weather, to be separated from Jenny, and move on to their new homes. Jake will no doubt appreciate a few less poults on the other side of the pen, as recently they’ve taken to grabbing Jake’s snood through the partition fence, and seem to enjoy giving it a good tug!  Little hooligans, it’s really not a very nice thing to do, but they do seem to enjoy having fun at Jake’s expense. To the poults, Jake's snood must look like an irresistible worm! I expect after all this hard work, Jenny will also be grateful for a rest.  She’s done an excellent job, and we couldn’t have asked for her to be a more attentive hen.  There’s no question we’d have Jenny raise the next clutch, instead of using a brooder box.  I honestly believe the poults were better off being raised by her. I wish we could keep them all, every single one.  They’ve been wonderful fun to have around the farm these past few weeks, and as difficult as it will be to let them go, it’s necessary for us to reduce the size of this flock at least until we can build the new turkey enclosure. Hopefully by next spring though we’ll have a little more room for a few more turkeys on the farm!