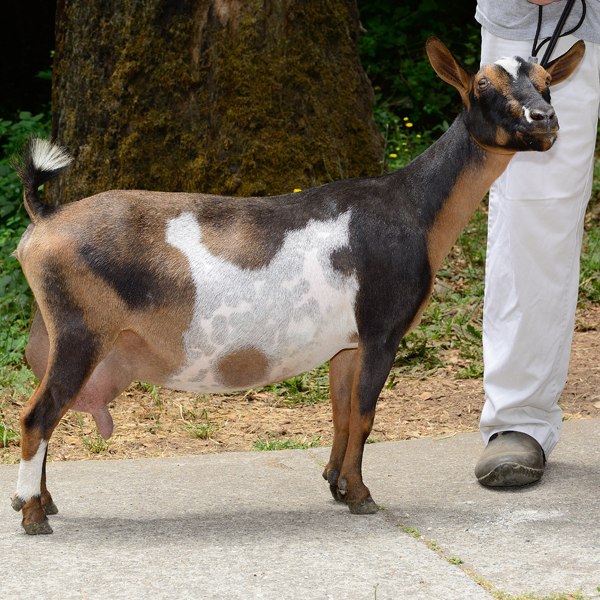 Minerva, an Etruscan Goddess of war, and our resident herd Queen. As a dry yearling she more than lived up to her name, and bore no shame in demonstrating to man nor beast that SHE was in charge. So much so, I came incredibly close to selling her at one point. I am so relieved I saw sense, and just hoped we were going through the terrible-twos. We watched her like a hawk when she freshened, fearful for her kids. However, the moment she kidded and met her daughter, Bellona, her entire demeanor changed, and thankfully, Minnie is now the sweetest, and one of the smartest goats on the farm.

As a dry yearling Minerva matured into a gracile, smoothly blended, and stretchy doe. She was consistently commended by judges that season for her length of body, her long, graceful neck, level topline, and for remaining level while on the move. Minerva has good angularity, beautifully straight forelegs, and excellent feet, both front and rear.

Even as a junior Minnie garnered significant attention, both in the barn, and in the show ring, and achieved her junior Grand Championship leg as a dry yearling in her first show that season, against some very strong competition.

Her first freshening udder was very well supported, with a strong, smooth fore udder, good teat placement and length, and a soft and supple udder texture. Minnie easily earned her Advanced Registry milk stars in volume, and butterfat, with ADGA and AGS, producing a very respectable 800 lbs of milk.

Minerva’s third lactation in 2016 was extended through 2017, and her lactation remained remarkably stable, proving her incredible will to milk. Milking through, however, did impact her appraisal score in 2017, but we intend to reappraise her once she freshens again in 2018. Meanwhile, as a third freshener, Minnie did achieve top ten status with AGS for protein production in 2016.

It’s difficult to find fault with Minnie, but no doe is perfect. Minerva is more open in the shoulder than we would like, and we are striving to improve that in her offspring.

Minerva has matured into a beautiful doe though, with an affectionate, almost cat-like personality. She had a great year as a second freshening three year-old, not only earning VVEE 90 on Linear Appraisal, but she also earned her Superior Genetics designation with ADGA the same season, and became a finished ADGA Permanent Champion.