We had originally intended to cross Lotus to Hanukkah, but as Lotus is now retired, we elected to work with her daughter instead.

Kolibri is a Lotus granddaughter, and her dam Redwood Ivy is one of my favorite Lotus daughters. While her sire predictably diminished her production, Ivy did gain some of the structural improvements we were looking for.

In an effort to enhance production, while making further improvements in rump width, and forelimb assembly, we crossed Ivy to Hanukkah. Kolibri has some promising potential, already showing improvement in strength and width over her dam, and we’re anticipating improved capacity and production when she freshens. 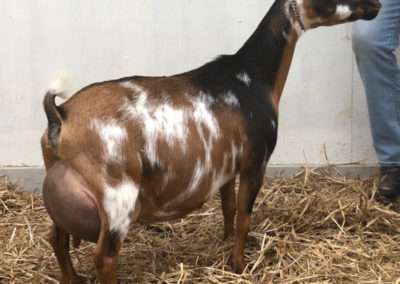